Four Seasons Resort Seychelles at Desroches Island sits alone on a remote coral atoll in the Indian Ocean, 1,600 kilometres (1,000 miles) off the coast of Africa – this is a place where you can truly unplug. Leave technology behind and stake out your spot along nearly 14 kilometres of pure white sand, wander the wilderness paths in search of giant tortoises, or let lapping waves lull you into repose during an oceanside spa treatment.

Patrick Moreau of Muse Storytelling spent seven days on the atoll with his filmmaking crew and was astounded by its power to pull one into the here and now. Here, in his own words, are his suggestions for disconnecting from devices in order to reconnect with yourself and your surroundings. 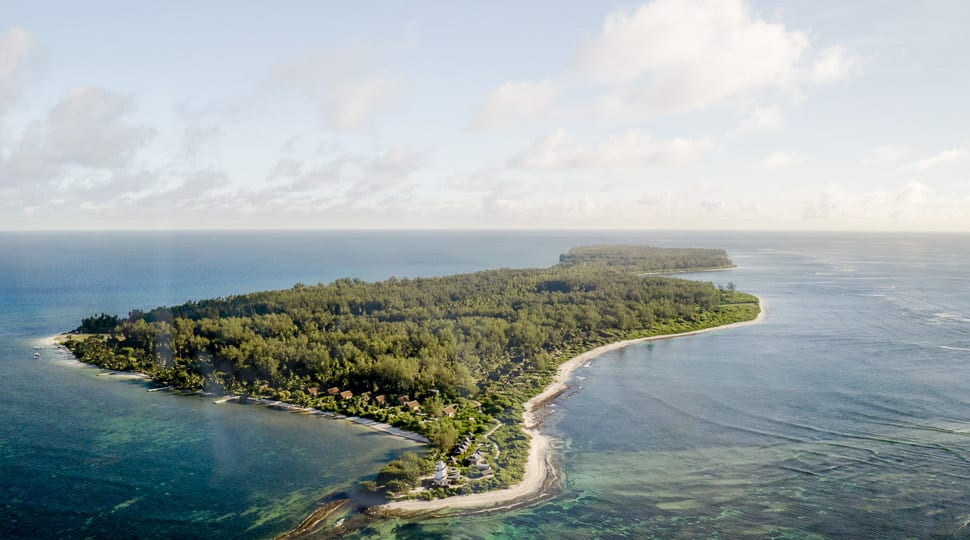 As you’re coming in on the chartered plane from Mahé, the main island of Seychelles, Desroches Island comes into view; you can see out your window that the Resort is the only thing on this lush, 6-kilometre-long stretch of paradise. The runway is essentially the porte cochère – the plane lands, you step off and staff members are there to greet you. Ganga Sadhuka, the resident yoga instructor, says it perfectly: “You step off the plane and drop into the lap of nature.” Endless ocean to your right, forest to your left and this exquisite Resort directly in front of you – in the middle of nowhere. 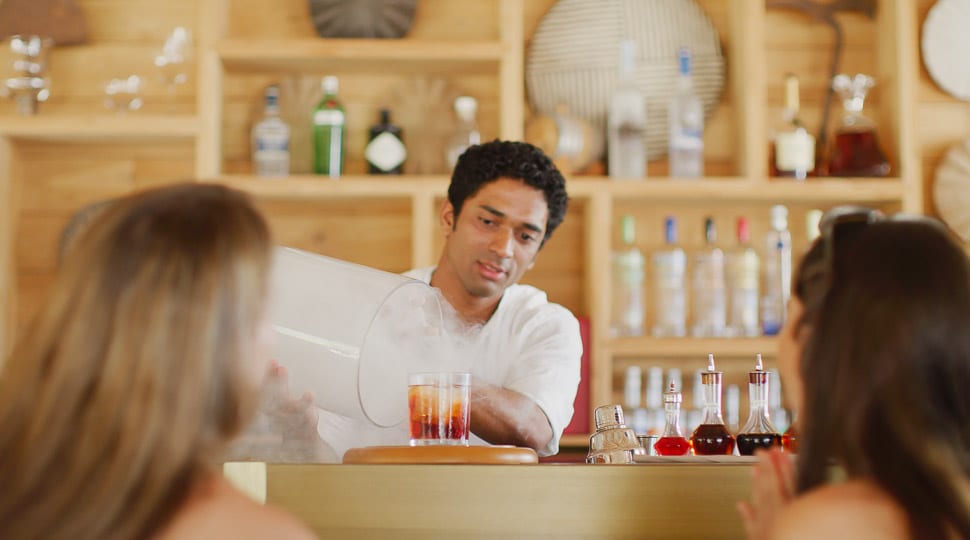 There is no cell service on the island, and the Wi-Fi only works when you’re in the Resort itself. So you become more intentional about using the connection – and gradually you use it less and less. Instead of waking up and looking first at your phone, you go outside to witness the sunrise. Instead of sitting at the bar scrolling through apps, you get to know the person making the cocktails. You just keep making these kinds of decisions, and soon you’re not missing your phone at all; you don’t even want to pick it up.

Knowing everyone around you is experiencing the moment fully as it’s happening makes it that much more poignant.

It’s a collective experience among guests. Where else can you go into a restaurant and not see a single person holding a phone? The sun is setting, and you’re looking out at the ocean across an infinity pool, and the food is world-class, and everyone is present. Knowing everyone around you is experiencing the moment fully as it’s happening makes it that much more poignant. 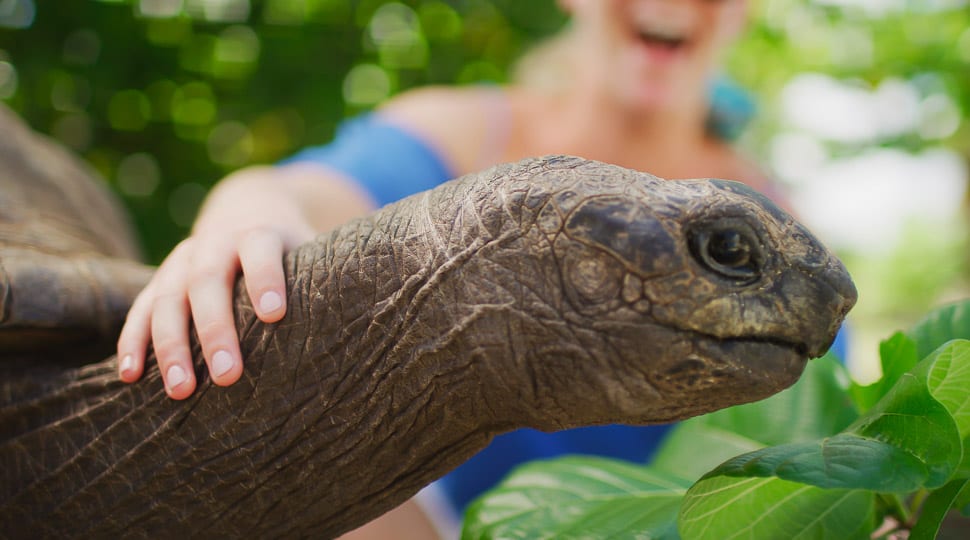 Giant Aldabra tortoises are indigenous to Seychelles and roam freely around the island. At 120 years old, one in particular, named George, is thought to be Desroches’ oldest inhabitant. When you see this massive shell that you thought was a rock get up and start walking, it’s just unbelievable. They can be 1.2 metres (4 feet) long and weigh 250 kilograms (550 pounds) – you can’t prepare yourself for that kind of size and scale. You can reach out and pet George, and even feed him an apple. The whole thing brings a sense of childlike awe. 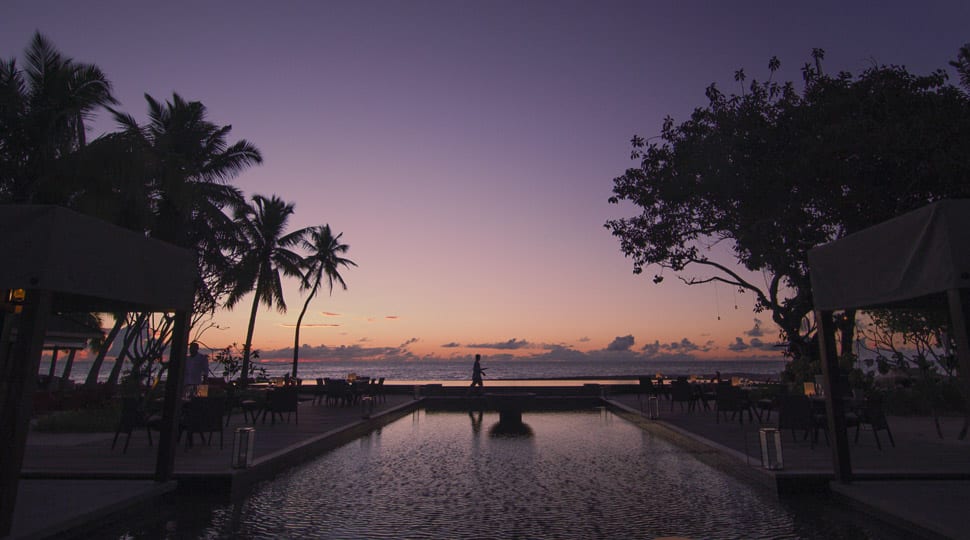 My crew and I very quickly became attuned to what the sun was doing. Without even trying, we would wake up with the sunrise. Every room is a stand-alone villa and each has its own private plunge pool, so every night I’d have a swim underneath the stars. It became this relaxing ritual, and I later discovered that everyone on the team was doing the same thing. It’s so spectacular that you’re just compelled to take it in. 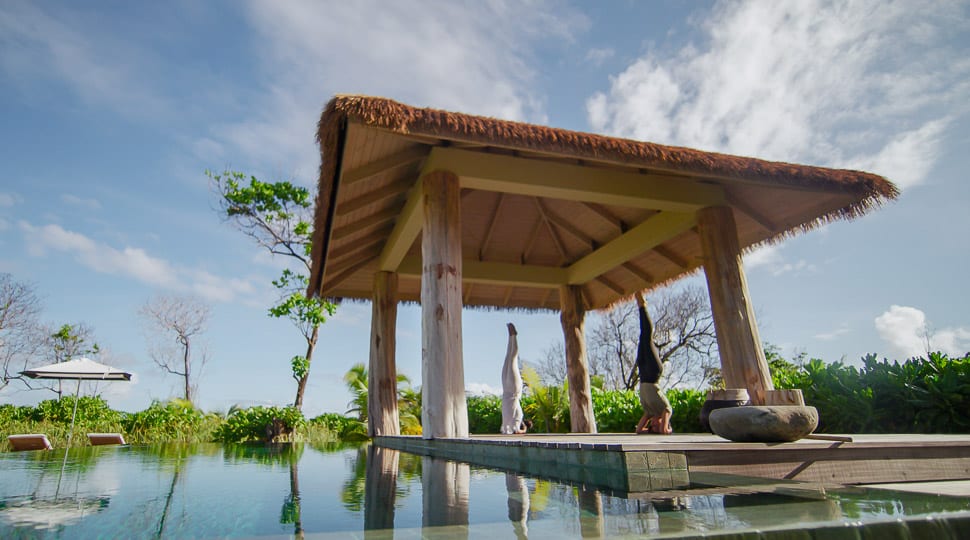 Ganga Sadhuka is the Resort’s yoga instructor, and her magical spirit was a highlight of the trip. Ganga started practicing yoga at age 4. She wakes up at 5:30 every morning and does a headstand to remind herself to take risks in life. I didn’t think I was ready for the group yoga practise, so I booked her for a private session. She pushed me – sometimes literally pushed on my body – and told me, in the most gentle way, “Trust your body. It can do this.” She has this ability to get you out of your mind, out of that I can’t do this kind of thinking, and into your body. 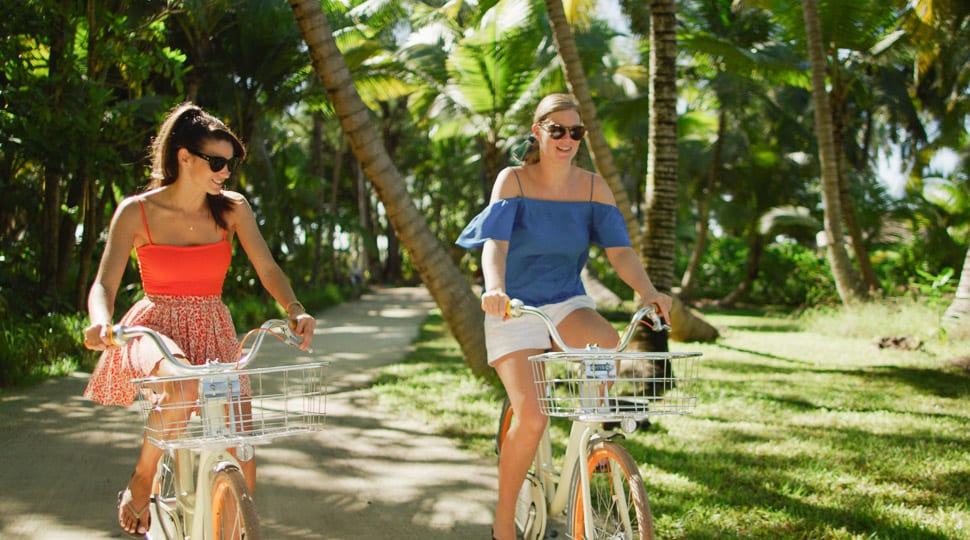 Each villa comes with two gorgeously designed single-speed bikes. You can go anywhere on the island – it takes about 25 minutes to ride from one end to the other – and there are no cars in sight. You can stake out your own spot in the sand and not see a single person all day. Or, if you want a picnic at a certain place and time, the staff will arrange that. You simply arrive at the designated location, and a basket and umbrella are waiting for you.

You can stake out your own spot in the sand and not see a single person all day.

In day-to-day life we’re always on to the next thing before finishing the first, and exploring the island is the complete opposite. You stop when you want to stop, and you never know what you’ll discover. I saw a turtle swim up to the beach, dig a hole, lay its eggs and then swim back to the ocean. There is so much unadulterated nature, it’s incredible. It makes you feel like you’re a part of something bigger. 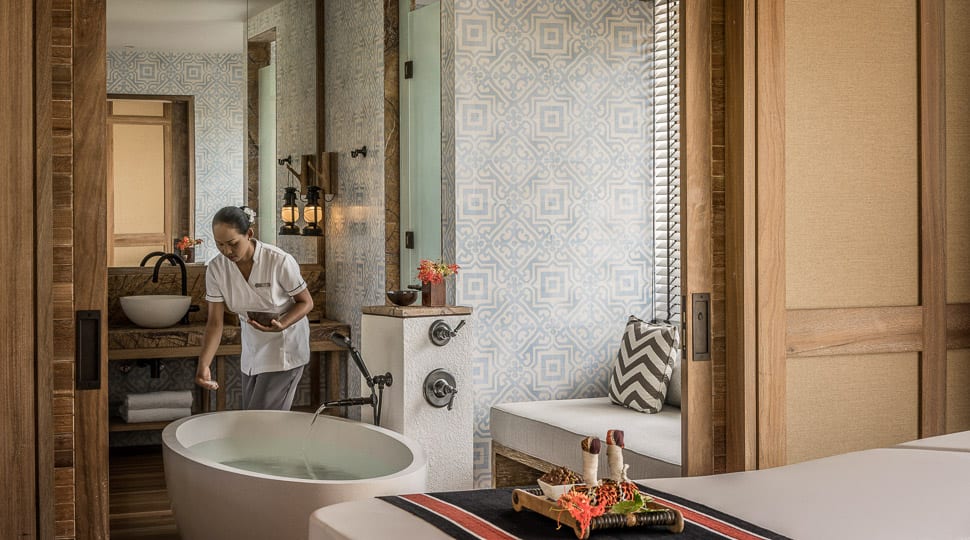 During the Sound of the Waves massage, the therapist rolls an ostrich egg filled with hot baobab seeds over your body. Not only is it a truly relaxing sensation, but it also mimics the sound of the ocean. This all happens in a small private villa on the beach that’s tranquil, bright and beautiful. Massage is known to be relaxing, but elements like these, coupled with the lapping ocean waves, create an experience far more transcendent. 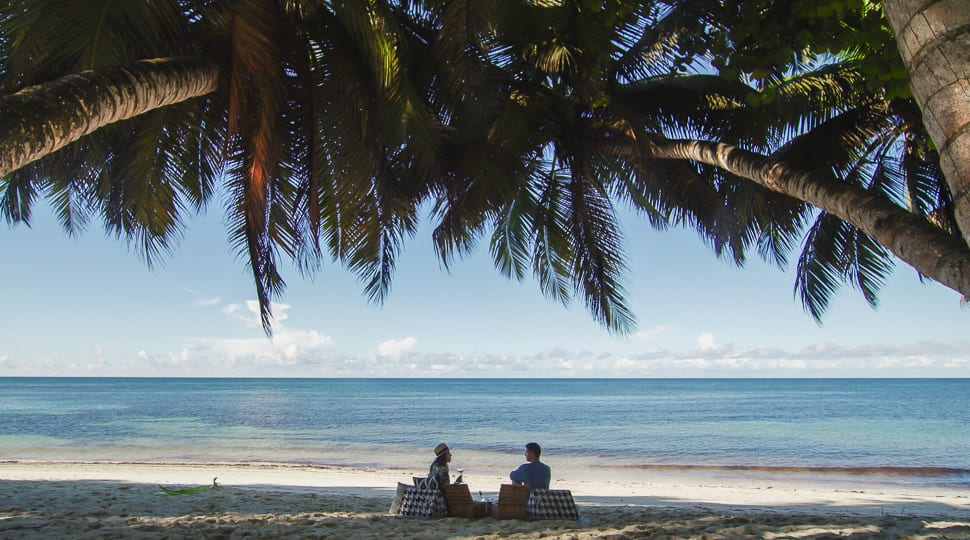 When you’re in a place this incredible there’s an urge to capture everything you see with a photo, to preserve the moment and share it with the world. But every time I did that, I noticed this huge disparity between the photo I took and what I was seeing. A photo simply cannot capture what’s unfolding in front of you. My experience was so much richer once I put down my phone and surrendered to the magic of the island. If you focus on the moment, cultivating memories and stories instead of images, you’ll return home with something so meaningful it stays with you for years to come.

Reconnect with what matters. 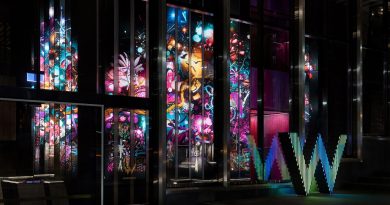 Hawaiian Culture: One, Many, All | Hawaii’s Human Mosaic