Refurbished and ready to ride the rails, a new train tour brings slow rail travel to the east coast of Australia, offering an entirely new way to experience the countryside.

Launched in November 2020, the ‘slow rail’ tours use a network of freight routes largely inaccessible by the public in regions like the Riverina, the north coast of NSW and NSW Central West.

The timing for this new way to see the country couldn’t be better, adding much needed capacity to the very crowded regional tourism market.

The darling of travel in its heyday, the Southern Aurora was an overnight express passenger train service between Sydney and Melbourne. The service began in 1962 and retired in 1986, with many carriages eventually sold off. 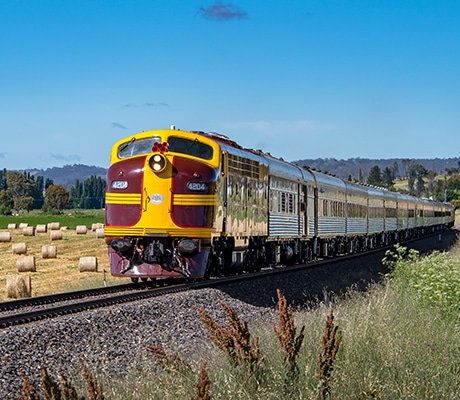 In 2017, retirees Simon Mitchell and Danielle Smith acquired 16 of the classic carriages, with a view to restoring them to their former glory.

“It’s quite a comprehensive program to get them from being stuck in a railway yard,” says Mitchell.

“Some of them hadn’t turned a wheel in revenue service since 1994,” he says. 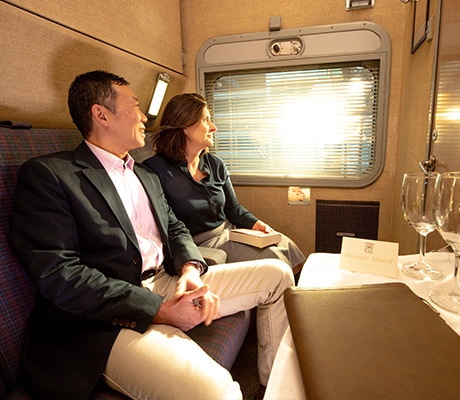 Built in a 1950s’ American-style; the vintage cabins have a unique feel.

Beyond the essential mechanical and engineering work required to bring them up to service standard, there was also the task of restoring the interiors of the Southern Aurora carriages.

Despite being a 1960s’-era train, the vintage cabins have a unique feel; they were built in a 1950s’ American-style, and were fitted with original 1930s’ Art Deco-style light fixtures from J. Stone & Co, Deptford in London.

A restoration team painstakingly cleaned and restored the original 1962 mid-century vintage wallpaper, scrubbing gently by hand to remove decades of diesel soot and grime from the delicate weave and, in some cases, using tweezers to gently tease out and repair damaged pieces. 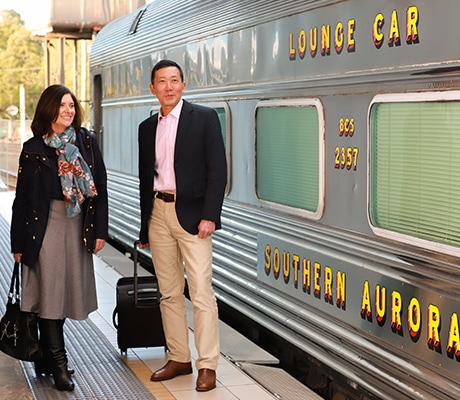 The interiors of the Southern Aurora carriages have also been restored to their former glory.

Just as they did back in the day, the private cabins in each sleeper convert from lounge seats to beds; twin rooms have an en suite; while singles have a vanity and shared bathrooms.

The single cabins have been a particular hit with solo travellers keen to see regional Australia but wary of driving vast distances alone. While the cabins offer privacy, guests also have the option of being social in the lounge and dining cars. 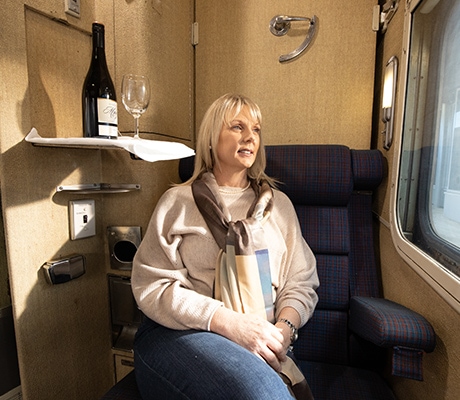 The private cabins in each sleeper convert from lounge seats to beds.

And, in another throwback to a more service-oriented time, an attendant is also assigned to each carriage.

“It’s that Australian informality and hospitality that people really enjoy, where you’ve got a guest attendant… they can go and get you a cup of tea if you’d like, or answer any questions you might have about where we’re going and what we’re doing and that sort of thing,” says Mitchell. 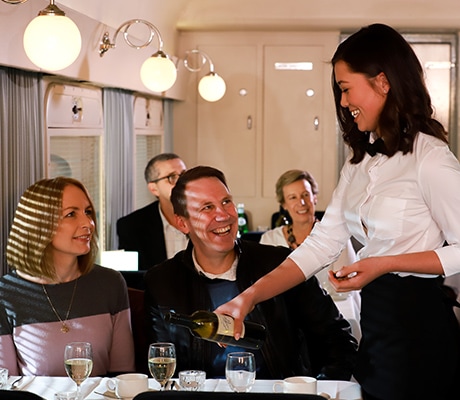 Experience the best in service throughout your journey.

On the Right Track

Despite being on a set rail route, there’s also the element of adventure to the trips. The trains use a freight network not normally traversed by passenger trains, offering views of a unique landscape normally only glimpsed by engineers and far from traffic on the highways.

“Some of our guests have said they’d driven the caravan and the family on lots and lots of country trips, but that all they’d seen was a black strip. They tell me it’s the first time they’ve had a holiday where they’re looking out the window,” says Mitchell. 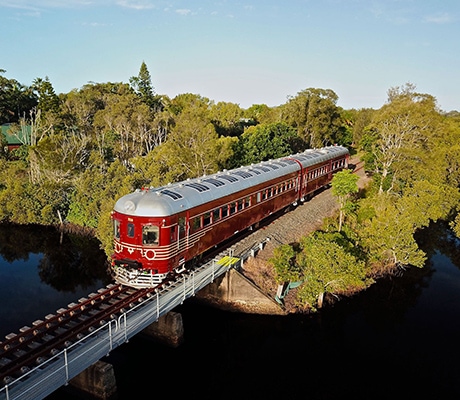 The journey offers views of a unique landscape normally only glimpsed by engineers and far from traffic on the highways.

Only part of the day is spent travelling, and continuing with the classic theme, guests are transported to their excursions on a retro streamliner bus.

“Wherever we can, we’re hauled by 1950s’ streamliner locomotives. And we’ve got a 1947 flexible clipper bus that shadows the train, and people just love the streamliner buses. The guests are like little kids when they get to go for a run in the bus,” says Mitchell.

Excursions are included, but vary on each tour. The North Coast Rail Tour, for example,  includes the option of a visit to the historic port of Morpeth on the Hunter River, an exploration of Trial Bay Gaol at South West Rocks and a visit to the Slim Dusty Centre at Kempsey. Other tours traverse the Central West and Riverina areas of NSW. 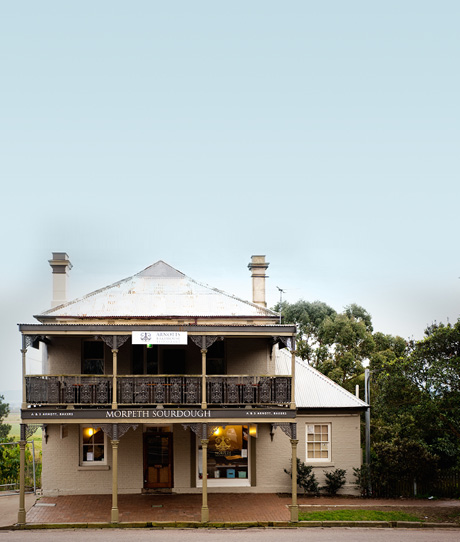 First built in the 1830s and restored circa 1850, the Morpeth Sourdough building is truly special.

“We’ve restored nine so far to operational condition, and we’re working on our 10th at the moment. Each carriage probably takes a year to be restored and get into service,” says Mitchell. 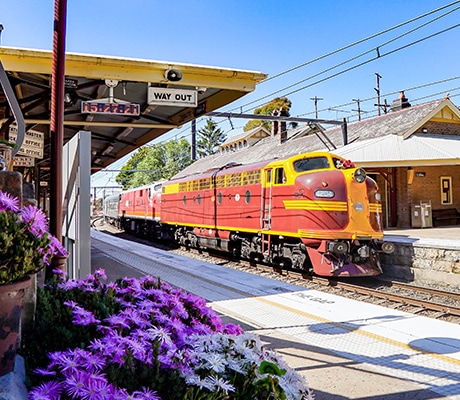 Only part of the day is spent travelling, the rest is spent exploring unique places along the way.

While the other carriages, including a power van, dining carriage and additional sleepers wait to be restored, the remaining carriages used by Vintage Rail Holidays are provided by Transport Heritage NSW. The income from tours helps the organisation preserve and maintain some of these icons of Australian rail.

“We say to people, since our first rail tour in November, every single window in the lounge and dining carriages from Transport Heritage NSW have been replaced” says Mitchell.

“That was only brought about because people were booking on the tours. They’re making a permanent difference to these heritage assets.” 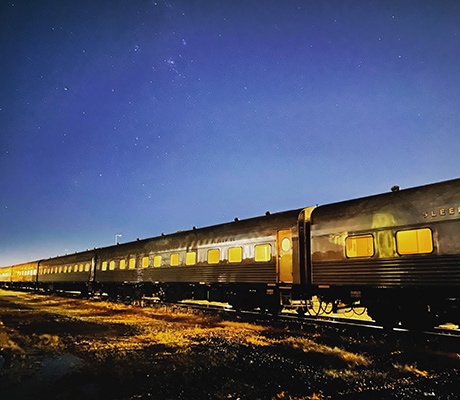 The trains use a freight network not normally traversed by passenger trains – so expect an element of adventure on your journey.

The best European destination to travel to in 2017 – Lonely Planet

Win a stay at Thyme in the Cotswolds

The Unspoiled Kingdom of the Cats