The notion of ageing wine underwater gained traction when in 2010, a cache of Veuve Clicquot Champagne dating from 1825-30 was found in a wrecked schooner off Finland’s Åland archipelago, underwater for nearly two centuries, successfully auctioning off for serious money. Experts accessed the wine to be of excellent quality, remarkably fresh, sweet in style, bright golden colour and honeyed, toasty and earthy aromatics.

With the distinct possibility of charging a higher premium for an existing luxury product while offering a superior taste for a beverage that has not seen innovation in process for centuries, it was natural for winemakers to experiment with ageing and maturing wine underwater. Since 2010, many winemakers in France, Spain, Croatia and even Argentina have started ageing small batches of their vintages underwater.

The technique of ageing wine underwater for a limited period has only been brought into experimentation since 2010 or thereabouts. Compare this to the industry norm of ageing wine in cellars since 1000 AD, underwater wine ageing is considered by most as a marketing ploy to charge a premium for a new experience.

Experts who have tasted wine that has aged underwater and compared it to the test batches of the same vintages that have been aged in cellars suggest that the tasting notes of the underwater wines are far more distinct and exciting.

Some of the enhanced attributes of underwater aged wine include greater intensity of colour, a milder change in the wine’s hue over time, a greater intensity of aromatics with accentuated fruit and floral notes. All these make for a louder wine with a slower ageing process. On the palate, the underwater aged wine has a greater sense of freshness and silkiness. These are enough reasons to justify an extra splurge on such wines.

How is wine aged underwater?

The process of ageing wine underwater is straightforward on paper, costly and with risks in practice. The objective here is to store the wine in as dark a place as one can practically achieve underwater, away from oxygen – or air for that matter and in a constant ambient temperature.

The deeper one goes underwater, the darker the ambience becomes as light penetrating such depths gets weaker. There is rarely any significant light beyond 200 meters underwater. However, a standard 750 ml glass wine bottle tends to implode under pressure once it travels beyond 25 metres. To overcome the pressure of the water exerted on the wine bottle, one can either store and age the wine underwater in a stainless steel drum, coat the bottle with clay to form a rudimentary jar that encompasses the fragile glass, keep the depths of storage near 25 metres or opt for a Magnum bottle that can theocratically withstand pressure up to 60 meters.

The United States Food & Drug Administration, in 2015, advised that contamination of underwater aged wine could be a reality as bottle seals can be compromised due to pressure. To keep air molecules from escaping and saline seawater seeping into the wine bottle, at least a couple of layers of rubber are used in addition to cork to seal the bottle.

The sea or lakes tend to be public property, and theft by sneaky divers is a reality. Metal cages need to be fabricated and lowered to the appropriate depths to secure batches of wine within these structures. Regular diving trips need to be undertaken to inspect the underwater storage and ensure the entire apparatus remains intact.

One can start to imagine the added effort and inherent risks of ageing wine underwater compared to simply storing oak barrels filled with wine in cellars underground. The summer of 2014 observed LVMH’s Veuve Clicquot embark on an audacious experiment dubbed ‘Cellar in the Sea’ that involved submerging a selection of non-vintage Yellow Label, Vintage Rose 2004 and demi-sec wines in a metal cage called the ‘Aland Vault’ sent 40 meters below the Baltic Sea surface to be stored at 4 degrees Celsius. An identical sample selection was kept in the House’s chalk cellars in Reims. The winery has committed to testing both batches every two years over the course of the next five decades.

The Aland Vault cellar in the sea © Veuve Clicquot

Gaia Winery in Greece has earlier experimented with ageing wine in the Mediterranean in 2009. They sank 500 bottles of Thalassitis, a wine based on Santorini’s Assyrtico grapes beneath the Mediterranean as a test. The batch was lost at sea when a storm swept away the metal cages holding the wine. The 2010 experiment witnessed bottle caps coming off due to pressure and seawater mingling with wine. 2011’s batch succeeded with 211 bottles going on sale, all with bright, fresh colour and maintaining a fresh aroma without any trace of oxidation.

Bordeaux’s Chateau Larrivet Haut-Brion attempted to age a single 56-litre barrel of their 2009 vintage, partially submerged in the oyster parks seabed of Cap Ferret, on the Atlantic coast. A tasting in June 2011 revealed the emergence of better tasting wine as compared to the same vintage aged in the Chateau. Analysis of the underwater aged barrel pointed to softer tannins, slightly lower alcohol, slightly elevated saline levels and greater complexity.

Inspired by the twelfth volume of ‘The Adventures of Tintin – Red Rackham’s Treasure’, documentaries about Cousteau and news of bottles of wine discovered in shipwrecks, Borja Saracho and Joxean Sáez de Ocáriz started a research project in 2008 looking into the ageing process of wine underwater. In the market since 2013, their creation, ‘Crusoe Treasure‘ is now Spain’s largest underwater cellar 20 meters under the Bay of Plentzia. Aged for up to 18 months, the wines are made with Tempranillo and other classic Spanish grape varieties. The wines’ treasured’ under the sea have evolved differently from wines aged in cellars and command a premium in this new market for underwater aged wine.

An ocean and hemisphere away from Europe, ageing wine underwater is being experimented with in Argentina’s Wapisa winery in the Patagonia region, along the Atlantic Rio Negro coast. The team submerged 1,500 magnums of their 2017 Malbec-blend in crates at depths between six and 15 metres, 25km away from their vineyards, off the shore of Las Grutas. Results of blind tasting underwater aged wine and cellar aged counterparts were stunning, leaning heavily towards wine that had picked up a marine soul.

Croatia’s Edivo Vina situated on the Dalmation Coast adds a certain level of ‘antiquity-ness’ to the whole process of ageing wine underwater. Along the Pelješa peninsula, not far from Dubrovnik, is the small village of Drače, home to an underwater wine cellar hidden inside a sunken fishing boat since 2003. The winery cases its wine bottles in a rustic terracotta amphora – a ceramic jar similar to the ones used in antiquity and stores them in the bay’s calm waters for up to 2 years at a depth of 14 to 20 meters.

The wine bottle inside these amphora jars does not see sunlight for the entire 700 days as it ages in the Adriatic Sea. Corals, seashells, algae and other marine matter latch onto the terracotta jar, becoming part of the packaging design. Tourists and locals alike get to scuba dive and tour the underwater wine cellar with qualified staff and indulge in wine tasting – a unique experience that brings together the best of the Adriatic coastline. ◼

The Singapore Sling at the Long Bar in Raffles Singapore

Mayfair’s one-Michelin star ‘The Square’ – a symphony of flavours 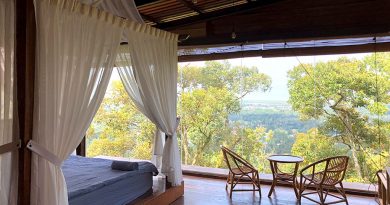 Stay and sleep with the world’s smelliest fruit – the Durian! 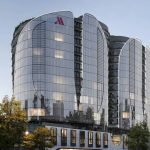