At so many luxury wellness resorts, food can often come as an afterthought with all of the focus diverted to the wellbeing programming and activities. But this couldn’t be further from the case at the Hawaiian retreat of Sensei Lanai, A Four Seasons Resort. Here, nutrition is every bit as important as the resort’s guided yoga sessions and coastal hikes. So much so, that the five-star Hawaiian wellbeing destination has teamed up with renowned Japanese eatery Nobu to create a nutritious menu filled with deliciously fresh natural flavors and ingredients.

The nutritional offering at the island resort,  known as Sensei by Nobu (which is also the name of the resort’s restaurant), forms the backbone of one of its three core wellness elements: nourishment. The other two elements, movement and rest, are achieved through an enriching program of expert-led health and wellness practices.

The culinary programming at Sensei Lanai, a Four Seasons Resort is the result of a collaboration between legendary Japanese chef Nobu Matsuhisa and the resort co-founder, American physician Dr. David Agus. Utilizing a science-led approach to nutrition, the pair have crafted an ever-evolving menu that showcases fresh ingredients from the organic Sensei Farm which is located on the island.

The resort’s farm works with leading agricultural researchers to inform the growing process and bring out the best nutrients in each plant for optimal nourishment and minimal environmental impact. This is achieved through hydroponic farming methods which keeps water usage to a minimum, as well as solar energy, with Sensei Farm’s greenhouses powered by Tesla solar panels.

Once the fruit and veg leave the soil, the resort’s expert culinary team transforms the produce into meals designed to nourish as well as delight.

For lunch and dinner, the wellness resort’s menu is split into two sections: Sensei by Nobu and Sensei Nourish / ©Sensei Lanai, A Four Seasons Resort

Sip on a Sensei Signature Cocktail or artisanal saki from the bar / ©Sensei Lanai, A Four Seasons Resort

At breakfast, guests can start the day by indulging in an array of delectable dishes such as flaxseed pancakes with yuzu yogurt mousse, house-made berry compote or fresh eggs straight from the farm. Dishes can be enjoyed with fine fairtrade coffee, a vitamin-packed smoothie or an extensive selection of Ikaati teas including Nobu’s shiso signature blend.

For lunch and dinner, the wellness resort’s menu is split into two sections: Sensei by Nobu and Sensei Nourish. The former incorporates traditional classic dishes by Nobu, while the latter focuses on Sensei’s ‘nourish’ philosophy.

Light dishes are served at lunch and signature dishes from the Sensei Nourish menu include spicy shrimp and quinoa salad served with roasted baby beets, tomato vinaigrette and tropical fruits. From the Sensei Nobu menu, the kohlrabi salad with parmigano reggioano, yuzu and miso is a treat for the tastebuds.

When it comes to dinner at Sensei Lanai, a Four Seasons Resort, the Sensei Nobu five-course tasting menu curated by chef de cuisine Yoshimaru Honda must be sampled. There is also an extensive a la carte menu featuring mouth-watering selections such as A5 Japanese wagyu with Nobu sauce trio or roasted lobster with Sensei farm tomatoes and vinaigrette. The coffee hazelnut millefeuille with bitter chocolate sorbet for dessert is not to be missed.

Dishes are served within the resort’s beautiful light-filled glass pavilion featuring floor-to-ceiling windows and a seamless transition to an outdoor terrace overlooking a koi pond. 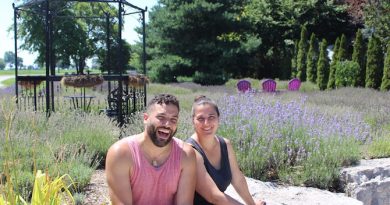 A Wine Tasting and Birding Getaway in Windsor-Essex