“YIKES, THEY’RE NOT PUTTING YOU in the inlet, are they?! That’s croc country,” jokes my cabbie when I tell him my drop-off address near the pier. Despite his levity, he’s deadly (err) serious, but I still can’t help but laugh along with him. A land of super-sized coral and toothy prehistoric reptiles, Cairns, in the region of Queensland known as Tropical Far North, is one of those destinations that you tell your friends about and they think you’re pulling their leg.

With the jewels of the Great Barrier Reef to one side and living, breathing giants to the other (the world’s oldest rainforest, the Daintree, is about 2½ hours north and has been there since the dinosaurs), this town of just 169,000 should be make-believe. And yet every fiber of this destination’s tapestry is soul-stirringly real.

Upmarket travelers used to skip it in favor of resort-laden Port Douglas and Palm Cove to the north, but there are new luxe digs, a buzzing scene and helicopter adventures priming Cairns for It-Spot status. Here are some ideas to plan your trip.

Well, in Sydney, at least. So nothing is quite as satisfying as shedding my layers the moment I touch down in Cairns, where the temperature is hovering at 26 degrees, unusually hot for this time of year. Right after arriving at The Riley, I take a moment to admire the view of the Esplanade and imagine the reef beyond from the balcony of my Sea room before making a beeline to the sandy-bottomed lagoon pool. It’s a necessity in a waterfront town whose nearby estuary makes it unsafe for swimming due to saltwater crocodile populations.

This flash, new hotel from boutique brand Crystalbrook opened in 2019 (sister hotels The Bailey and Flynn soon followed), and it’s the first rose-all-day stay of its kind in Cairns. Until its opening, most holidaymakers had bypassed Cairns in favor of the resort town of Port Douglas further north. Rooms at The Riley are unfussy and well-designed and its cylinder-like centerpiece hosts the town’s highest rooftop bar and Italian eatery Rocco.

“If you’re lucky, you might see a croc hanging out at the airport when you take off,” my driver says as we approach the Nautilus Aviation check-in for a once-in-a-lifetime heli-picnic in the Great Barrier Reef. My eyes are glued to the muddied channels below as pilot Baz maneuvers us towards the sea. “I’m not sure if they told you, but we can’t land if anyone is on the sandbank,” he adds, which serves to make our target more elusive than it already is.

We’re on our way to Vlasoff Cay, a tiny patch of white sand in the Coral Sea, where I’m hoping to frolic in one of the most perfect beach settings in the world. Beneath me, it looks like someone has dropped dollops of paint in the deep blue; they’re patchworks of coral, my first sightings of the reef from above. “We’re in luck!” Baz cries, as we circle around and come into land on the sandbank, with boats closing in, but not a soul yet in sight.

I spend the next two hours filling my bucket-list bank, mermaiding in diamond-bright shallows, sipping bubbly and eating cheese with my private chopper behind me. Beyond enough IG-bait snaps to last a lifetime, I’ve forever captured a sunshiney memory of the delicious combo of human-crafted luxury and nature at its most wondrous.

Hidden away in Mena Creek, about 1½-hour drive inland from Cairns, are the remnants of a real-life fairytale. I had heard about Paronella Park on the Instagram grapevine, and desperately wanted to see it for myself, so I set off in a rental car in search of a castle. This under-the-radar heritage-listed attraction is more than five hectares containing an abandoned, overgrown Spanish castle and manicured gardens, complete with a grand staircase, ballroom, waterfall, picnic and swimming area, tennis courts and astonishingly beautiful flora, including a bamboo forest. Built by emigrant Jose Paronella for his fiancee Marguerite in the 1930s, it’s a remarkable feat of design.

Also worth a visit is Mamu Tropical Skywalk about 30 minutes away, which offers fascinating facts about the rainforest and features an elevated walkway, cantilever and 37-meter-high observation deck for anyone game enough. Bonus: both the skywalk and Paronella Park are eco-certified.

Many Queenslanders feel a certain affinity towards rum – not surprising, given the state’s well-established sugarcane industry. But you won’t get a ‘Bundy and Coke’ (Bundaberg rum, that is) at cool-not-kitsch tiki-inspired Flamingo’s Bar off the Esplanade. The concept is relaxed, interactive and all about championing small-batch rum-makers with names like Dead Man’s Fingers. Bartender Chris makes a mean rum cocktail, off the menu or omakase-style for inexperienced rum drinkers like myself. (Tip: you’ll get A$10 pina coladas if you tell them you were caught in the rain — geddit?)

From here, it’s a short stroll to some of Cairn’s finest eats. I can’t stress enough the balanced perfection that is the spicy deep-fried salt-and-pepper quail with watermelon and finger lime at native-dining-themed Ochre. And if you don’t mind getting your hands dirty, Prawn Star, a trio of floating trawlers-turned-alfresco-eateries serves up platters of ocean fresh prawns, bugs, crayfish, sashimi and oysters in rustic setting with cheap ‘tinnies’ (beer) and wine.

All photos courtesy of Tourism Partners 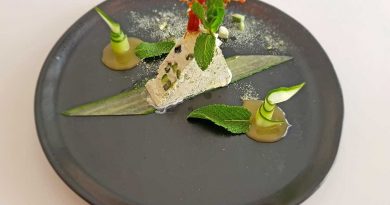 12 Weird (but Tasty) Flavors from Lithuania

10 of the best digital detox holidays