Born and raised in Singapore, Chef Vincent Aw comes from a family of humble hawkers. He regards himself as an adventurous Chef and finds immense joy in reinventing dishes of familiar flavours with ingredients that were not originally used, yet are able to complement and elevate the dish.

With 10 years of extensive culinary experience in the hospitality industry and working alongside culinary legends in top-notched hotels and Michelin-starred restaurants, including world-renowned Phillipe Legrand and local celebrity chef Emmanuel Stroobant, Chef Vincent’s journey is his reward and an inspiration for his fans.

Vincent is now the Executive Chef at PARKROYAL on Beach Road in Singapore, a melting pot of local and international cuisines. He oversees the kitchen team across all food and beverage functions of the hotel, including Ginger, Si Chuan Dou Hua restaurant, Club 5, Poolside Bar and Café, banquet and in-room dining. Chef Vincent’s interest in culinary stems from his love for the diverse local flavours and cuisines that can be found in the Singapore market. His childhood days were spent helping out at his grandparents’ hawker stall that specialises in local snacks. While assisting at his grandparents’ hawker stall that was adjacent to a wet market, he progressively acquired knowledge of a wide range of taste profiles.

During his teenage years, he started venturing out, taking up part time jobs at coffee shops and cafes only to gain new taste experiences. His keen interest in cooking made him join a culinary school. Upon graduation, he furthered his interest by pursuing stints at various restaurants and cafes that specialise in different cuisines and gradually uncovered his niche interest.

In one of his first full-time culinary jobs, he was fortunate to be hired as the only local cook in a fine dining French restaurant. As the only Asian, he was thankful for the opportunity and worked extra hard alongside the other experienced chefs who had greater international exposure. His hard work paid off and was recognised when he rose through the ranks from Cook 1 to Chef de partie within a year.

An Asian Chef trained in modern European cuisine he often recalls his experience while working at a premier private club in Singapore. While creating a menu for a Spanish wine pairing dinner he was working alongside a professional Spanish sommelier. Towards the end of the dinner, he made a special appearance for a chat with the diners and he can never forget the astonished look on their faces when they found out that an Asian Chef was behind the Spanish wine pairing dinner menu they had enjoyed.

His current stint as the Executive Chef at Parkroyal on Beach Road requires him to create menus of Singaporean and Asian cuisines. Fortunately, he grew up in the local wet market and his discerning tastebuds for local flavours has already been deeply rooted. His in-depth understanding of the different taste profiles allowed him to tweak his cooking techniques and incorporate less conventional ingredients to make it his own. Recalling a memorable incident as part of his journey in local culinary discovery – he used to frequent a now-defunct traditional braised duck hawker stall in the Jalan Besar market. He immediately fell in love with the rich and homely flavours and tried to uncover the recipe by chatting with the owner. However, the owner was adamant about it being a secret recipe and was unwilling to reveal the ingredients and cooking methods. Determined to work out the preparation, he started visiting the stall at least twice a week, and each time he visited, he would ask the hawker owner one question, to which the owner would answer ‘yes’ or ‘no’.

When I travel, I enjoy visiting local markets to explore and see what they have to offer. I can easily spend the entire day at the market discovering new flavours and think about how I could apply them to my creations of local fare or vice versa, to cater for refreshing dining experience for my guests.

Inspired by this experience, he eventually managed to recreate the braised dish that has been perfected with his own touch over the years.
Curating authentic flavours with contemporary presentations Chef Vincent recalls participating in a reality cooking television programme where he recreated a classic braised pork belly dish by fusing both local and Thai flavours, using mee siam gravy, soya sauce, cashew nuts and pineapples. The judges were all praises and pleasantly surprised by how well-balanced the dish turned out.

Through his various stints and guidance from respectable industry mentors, he gained knowledge and built his culinary philosophy around respecting and understanding the elements of core ingredients in order to curate authentic flavours and textures, complemented with contemporary presentations.

A secret that Vincent stands by is preserving local flavours. His style of cooking gelled perfectly with the ethos of Parkroyal. When using modern ingredients, he makes sure to infuse local flavours and spices in them, such as the marinating of ingredients through local methods or local spices. He believes that the cuisine he offers will play a huge role in creating a well-rounded experience.

Chef Vincent looks into recipes that use healthier ingredients as he believes people have become increasingly health-conscious following the pandemic. At the moment, he is also exploring more recipes that are vegan/vegetarian focused, as there is a growing number of people adopting these lifestyles to contribute to environmental sustainability. This will be translated into his series of experimental menu items, which includes the much-anticipated “Oysterless” Omelette Salad with Ginger Flower Vinaigrette, a unique spin on the well-loved local delicacy.

The hotel’s fully refurbished all-day dining restaurant Ginger will also feature a range of classic Singaporean flavours with a twist, such as the Chicken Salad with Buah Keluak dressing along with a new tapas menu with the revamped Club 5 destination bar at Parkroyal on Beach Road.

From the soothing environment of the dining hall to every flavour of his beautifully-crafted dishes, Chef Vincent wants to deliver a unique local experience to guests with a touch of modernity. ◼ 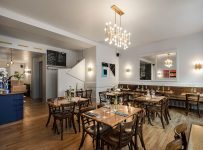 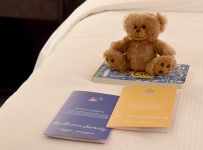